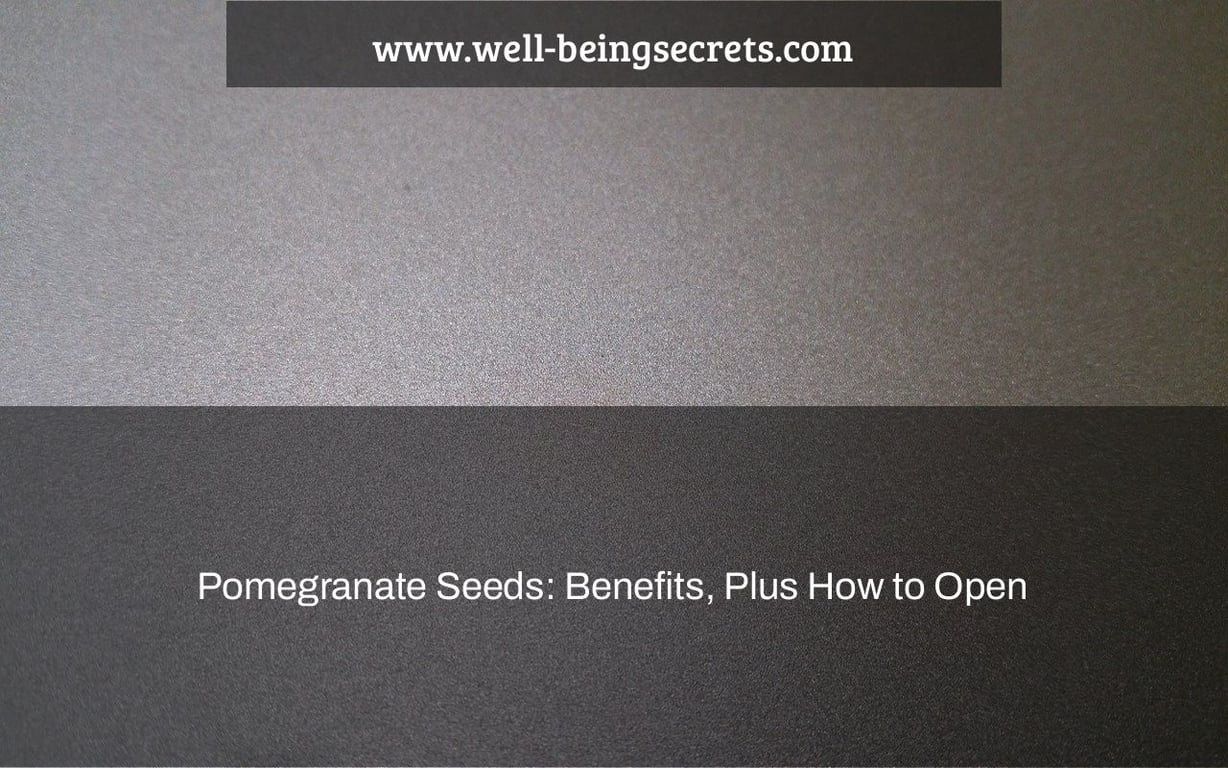 The pomegranate is a fruit that has been known throughout history. Some ancient cultures believed it was used to help heal things like arthritis and gout, while others thought the seeds were good for your skin or hair. Today, you can find this fruit in many types of dishes, from salads to cakes and juice and even wine.

Pomegranate seeds, which are the pomegranate’s edible insides, are small ruby crimson bursts of sweet and tart deliciousness with a hefty dose of health benefits.

Pomegranate seeds, which are high in antioxidants and polyphenols, have been shown in tests to aid decrease inflammation, limit cancer cell development, fight infections, and improve cognitive function. Plus, they’re tasty, healthful, and simple to include in various cuisines.

Pomegranate Seeds: What Are They?

Pomegranate seeds originate from the pomegranate, a huge orange-sized fruit with a smooth, thick skin that varies in color from brownish-yellow to deep crimson.

Hundreds of arils, which are the seed pods within the pomegranate, are separated by cream-colored membranes on the interior of the pomegranate. Juicy, brilliant-red fruit surrounds tiny, crisp, edible seeds in these arils. A single pomegranate may carry around 600 seeds, which is rather unusual.

The creamy white pithy area around the seeds may also be eaten, although it’s extremely bitter. Although you can easily juice pomegranates, you should avoid eating the rough outer shell.

Pomegranate seeds are high in vitamin K, vitamin C, folate, and potassium, among other nutrients. They’re also low in calories but rich in fiber, which is good for your heart.

Pomegranate seeds provide the following nutrients in a half-cup serving:

Because of their many seeds, pomegranates have long been connected with fertility and plenty in many civilizations. In recent years, though, headlines have begun to laud the pomegranate’s viagra effect as well.

According to a research conducted by Queen Margaret University in Edinburgh, the consumption of pure pomegranate juice elevated salivary testosterone levels by an average of 24%. This may lead to enhanced mood and sexual desire.

Are you worried about erectile dysfunction? Pomegranate juice has also been found in animal models to assist in enhancing blood flow and erectile responsiveness. Although additional study in people is required, it may potentially have comparable advantages for persons suffering from sexual dysfunction.

Arthritis is a common disorder in which one or more joints become inflamed, producing pain and stiffness that may increase with age. Flavonols, a kind of antioxidant that acts as an anti-inflammatory agent in the body and may help reduce arthritic symptoms, are abundant in pomegranates.

A pomegranate seed extract has been shown in animal models to lessen the development and incidence of collagen-induced arthritis. Pomegranate extract eating was also shown to lower the severity of arthritis and joint inflammation in animal studies.

Check with your doctor before adding pomegranate products to your regular regimen if you’re currently using arthritis medication.

According to a growing body of evidence, pomegranate seeds seem to be an effective cancer-fighting meal.

Pomegranate extracts, for example, have been shown in many in vitro experiments to successfully prevent the development and spread of breast cancer cells. Punicic acid, an omega-5 long-chain polyunsaturated fatty acid found in pomegranate seed oil, has been proven to inhibit breast cancer cell growth.

In vitro studies have shown that specific chemicals in pomegranate juice have potent antitumorigenic properties and may halt the development of prostate cancer cells in the lab.

Pomegranate seed juice includes a variety of antioxidants and polyphenols that may help to improve heart health by decreasing blood pressure.

According to studies published in Evidence-Based Complementary and Alternative Medicine, pomegranates have been proven to increase the good bacteria in the stomach, which may improve their capacity to combat bacterial illnesses.

Pomegranate seed juice has more antioxidants than many other fruit juices, which may help prevent cholesterol accumulation in the arteries in those who are at risk of heart disease.

The benefits of pomegranate juice on persons with carotid artery stenosis, which is a constriction of one of the two major arteries in the front of the neck that carry blood from the heart to the brain, were evaluated in a study published in Clinical Nutrition.

Polyphenols, which are plentiful in pomegranate seeds and juice, have been shown in studies to considerably improve cognitive performance. In addition, according to a research published in Evidence-Based Complementary and Alternative Medicine, pomegranate polyphenols may give long-term protection against memory impairment induced by cardiac surgery.

For four weeks, older people with memory impairments were given eight ounces of either pomegranate juice or a flavor-matched placebo drink. Those who consumed pomegranate juice exhibited considerably enhanced verbal and visual memory measures compared to the control group.

Furthermore, a study done by the Department of Psychology at Loma Linda University found that including pomegranates in your diet might help delay the advancement of Alzheimer’s disease, demonstrating pomegranate’s capabilities as a natural Alzheimer’s therapy.

While the pomegranate is said to be indigenous to Iran and its neighbors, it was formerly grown all the way around the Mediterranean and in the Arabian Peninsula, Afghanistan, and India. It’s now widely grown in the warmer portions of North and South America.

Grenadine syrup is made from the juice of pomegranate seeds, and it’s best recognized for its usage in the traditional nonalcoholic drink known as a Shirley Temple. Many different flavorings and liqueurs include grenadine.

How to Get Started

When it comes to removing pomegranate seeds, it takes some effort. Some may find the work tiresome, but the return is well worth it if you figure out how to accomplish it.

Furthermore, several firms have begun to sell pomegranate seeds alone in a ready-to-eat form, so there are no excuses for not including these tiny jewels in your diet regularly!

If you want the freshest seeds possible, you should get them directly from the fruit. Where can you get fresh pomegranates? You may get these delectable fruits at your local supermarket between September and January. When selecting a pomegranate, look for one that is hefty in weight and has leathery skin that is tight and taut with no soft patches.

A knife, bowl, and wooden spoon are required to open a pomegranate:

Alternatively, freeze them in a single layer on a tray and then store them in an airtight container in the freezer for up to six months. When thawed, the seeds are frequently shriveled, but they still taste delicious in anything you put them in!

Dried pomegranate seeds, also known as anardana, are also commonly available and may be pounded into a powder and sprinkled on top of your favorite foods for a pop of color and taste.

Do you want to make juice out of the seeds? Simply mix the seeds in a blender, then filter the liquid through a cheesecloth.

Pomegranate does not have a suggested dosage. Pomegranate seeds and juice are both regarded safe to consume as part of a balanced diet, and most healthy individuals have few adverse effects from consuming pomegranate. If you get food allergy symptoms after eating pomegranate seeds, stop eating them right once and visit a doctor.

When pomegranate juice mixes with some prescription drugs, such as the blood thinner warfarin and angiotensin-converting enzyme inhibitors like captopril, enalapril, and lisinopril, it might induce hazardous adverse effects. If you are using any of these drugs, speak with your doctor before ingesting pomegranate products.

Many people also ask whether dogs can eat the seeds of pomegranates. Although pomegranates are not poisonous to dogs, the seeds might cause gastrointestinal problems in particular. So before sharing this tasty fruit with your four-legged pals, consult your veterinarian.

How do you open and remove pomegranate seeds?

A: Pomegranates are a fruit that has small, hard seed pods. To open the pod and remove the seeds, you can either cut it half lengthwise or smash it with your hand to break off the lid and then scoop out any loose seeds before eating them.

Can pomegranate seeds be eaten whole?

A: To properly eat a pomegranate seed, you should scrape off the white rind before eating it.

How long do pomegranate seeds last once opened?

A: Pomegranate seeds will last approximately six to eight weeks after being opened.