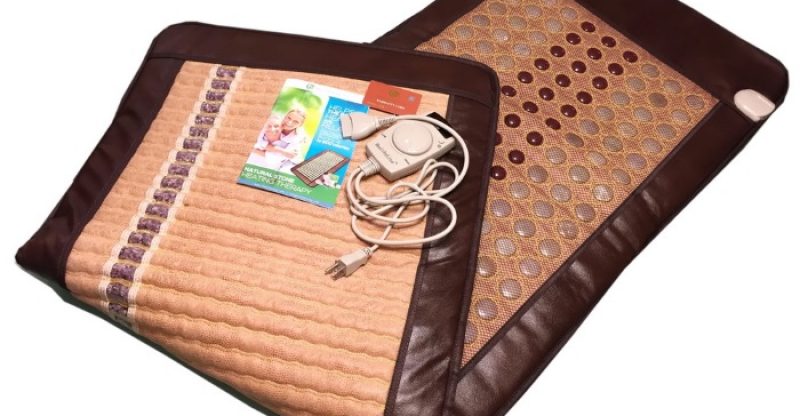 Have you heard of far infrared rays? You probably have.

But have you heard of the amethyst gem?

You may or may not. But when it comes to healing mats, this stone is often undeservedly neglected when one speaks about the incredible properties of healing mats.

The amethyst stone is used in some healing mats, and its contribution to health benefits is as significant as that of FIR, if not more so.

Unlike the FIR that can be harmful to your body, amethyst is completely safe.

Stay with us to learn about the numerous health benefits of amethyst mats.

Let’s clear a few things up first – What is Amethyst?

Amethyst is a semi-precious stone that has been recognized for many years for its ability to boost the circulatory and immune systems and metabolism, soothe the nervous system, reduce headaches, and provide a sense of wellness and balance.

It has been used to treat everything from toothaches to arthritis.

According to some, amethyst therapy is also capable of increasing their intuition and psychic powers.

Amethyst healing mats are now being used by both scientists and mainstream doctors who have come to recognize the healing properties of this stone.

Moreover, the amethyst stone also helps to carry far infrared rays, which have the ability to boost cardiovascular activity and vitality.

What amethyst crystals actually do is elongate and amplify the natural wavelengths of FIR rays.

This allows them to penetrate up to 6 inches deep into your body. Without the help of this crystal, FIR rays are capable of penetrating only up to 1 to 1.5 inches.

Amethyst is also known for its nickname “nature’s tranquilizer,” thanks to its overall healing and calming properties.

Below is the list of health benefits of amethyst mats.

There has been a lot of research conducted on the amethyst stone and its healing benefits for the body.

It has been proven to be effective in the treatment of various illnesses.

Here is the list of the benefits that you will get with amethyst mats.

Amethyst mats are considered to be very effective in body detoxification from heavy metals (such as aluminum and mercury), alcohol, nicotine, cholesterol, sulfuric acid, ammonia, and other environmental toxins (1).

Your body stores all types of biotoxins.

As it is incapable of expelling some of the toxins, the body stores them, which then induces various illnesses.

When toxic gases or potentially lethal heavy metal toxins approach large molecules of water, they become encapsulated by these clusters of water and are trapped in the body.

The build-up of these toxins hinders both blood flow and cellular energy.

However, applying an FIR wave of 7 to 14 microns to these large clusters of water triggers the water to vibrate.

The ion bonds of the atoms holding the water molecules together thus get weaker.

Once the water has evaporated, the encapsulated toxins and gases can be discharged.

Arteriovenous fistula is an illness where blood flows directly from arteries into veins.

As a result, the blood bypasses some capillaries, which end up with a limited blood supply.

This condition is affects the legs most commonly, but it can also occur anywhere in the rest of the body.

At the Department of Nursing in Taiwan, a 2014 study suggested that FIR can be helpful for the treatment of arteriovenous fistula in hemodialysis patients.

The amethyst stone coupled with FIR is reported to help with chronic fatigue.

These claims were backed by a 2005 scientific study published in the Journal of Psychosomatic Research that showed how repeated thermal therapy can treat chronic fatigue syndrome (CFS).

The therapy, which lasted for a total of 35 sessions applied once a day, was given to two patients.

They were subjected to sauna dry therapy; the results showed that repeated thermal therapy can be an effective method for treating CFS (3).

Lower the Side Effects of Diabetes

In 2010, a study was published in the Journal of Complementary and Alternative Medicine suggesting that far-infrared sauna use can improve quality of life in patients with type II diabetes.

Fortunately, the findings say that a sauna treatment seems to raise the pain threshold and contribute to improved quality of life in general.

Unlike many other diabetes treatments, this one is completely natural.

In 2010, a study published in the Journal of Alternative and Complementary Medicine followed a series of 20-minute treatments, applied three times per week.

The proliferation of certain cells is the most common trigger for cancer.

The change in body temperature caused by far infrared, coupled with the amethyst stone, inhibits this growth.

What’s more, an FIR treatment inhibits the spread of cancer cells (including lung, breast, and tongue cancer), according to Medical Oncology in London (5).

A study conducted by the Department of Radiology in Taiwan in 2015 suggested that FIR therapy is beneficial for nerve function.

The evidence suggests that FIR treatment is effective, noninvasive, and beneficial when it comes to increasing nerve regeneration and improving motor function.

Additionally, the study also found that FIR is effective as a novel treatment for various peripheral nerve injuries and diseases (6).

FIR therapy is reported to boost your immune system through subtle heating.

This change in body temperature triggers an increase of white blood cells and killer t-cells.

This kind of therapy has also been proven a promising healing method for the past few years – thanks to its ability to reduce muscle soreness, muscle spasms, and to inhibit the symptoms of rheumatoid arthritis.

Infrared saunas cause a short-term improvement in stiffness and pain in those with rheumatoid arthritis and ankylosing spondylitis, according to Clinical Rheumatology (7).

Thermal heating has been used for treating patients with chronic pain for many years.

In addition, it has been found that these methods can decrease pain without the need to take any medication.

Researchers from Nishi Kyusyu University in Japan conducted a study in 2005 with the aim of finding the link between infrared sauna heat therapy and improvement in mood and well-being – when combined with other holistic approaches (such as cognitive behavioral therapy and exercise rehabilitation).

The patients were divided into two groups – a control group, and a group undergoing an FIR treatment.

Two years after the treatment, 50% of the control group patients experienced an improvement, whereas 77% of the FIR group reported an improvement in overall well-being (8).

In 2015, a group of researchers led by Dr. Gaze investigated the healing properties of FIR therapy for chronic back pain.

Fifty patients with lower back pain were treated by sitting on an FIR mat on a daily basis.

The conclusions suggest substantial improvements in the patients’ mental and physical health (including decreased lower back pain).

In addition to that, the results do not include any adverse effects (9).

Allergic rhinitis is a medical condition that is one of the most widespread chronic conditions worldwide.

This nasal inflammation, also known as hay fever, happens when your immune system is not resistant to allergens in the air.

Allergic rhinitis is a nasal inflammation most commonly triggered by increased vascular permeability.

Many have tried conventional therapeutic options (such as immunotherapy, medications, or avoidance of the allergen), but unfortunately, these remedies kept coming up short.

Scientists thus had to find another way to treat this condition.

In 2007, the Engineering in Medicine and Biology Society published a research paper showing how FIR therapy can improve the symptoms of nasal stuffiness, nasal itching, sneezing, eye itching, and rhinorrhea.

This was caused by an increased blood flow in these areas – which proved that this therapy is a novel treatment for allergic rhinitis (10).

Far infrared therapy normalizes blood pressure, although there is limited evidence for these claims (11).

Nonetheless, medical researchers in Germany arrived at the conclusion that a one-hour session of FIR therapy is capable of reducing blood pressure levels significantly – as a result of a persistent dilation of peripheral blood vessels.

What they also noted is an improvement in blood viscosity.

And they saw a substantial increase in cardiac output, stroke volume, heart rate, and ejection fraction.

Despite all this, they still need more evidence and support for these claims.

In 1992, a group of scientists found that far infrared rays are beneficial for preventing sunburns.

The study was conducted by the Archives of Dermatological Research, where they found that infrared radiation (including far infrared radiation) inhibits sunburn cell formation caused by ultraviolet B rays (12).

According to a Journal of the American Medical Association report, effortless calorie burn is possible in a far infrared sauna session.

The numbers are equal when compared to rowing or jogging for 30 minutes.

In theory, far infrared stimulates the breakdown of fat and cellulite.

Water molecules and organic substances may absorb FIR easily, as they share the same resonant frequency.

Still, there aren’t yet any studies to support these claims, according to the Official Publication of the College of Family Physicians of Canada (13).

As we can see, there are numerous health benefits from these amethyst mats.

They can be very effective in treating numerous illnesses. However, when coupled with FIR, there are some precautions you should take to ensure complete safety.

In the above-mentioned properties of amethyst mats, we have learned how they earned such a reputable place in the medical world – due to their multitude of potential uses, and therapeutic effects and benefits backed by world-class research.

Still, as any other therapeutic device, these also can fall short because FIR may be harmful to some people in some cases.

For that reason, we are giving you a list of potential adverse effects of FIR.

You should not apply FIR in these cases: