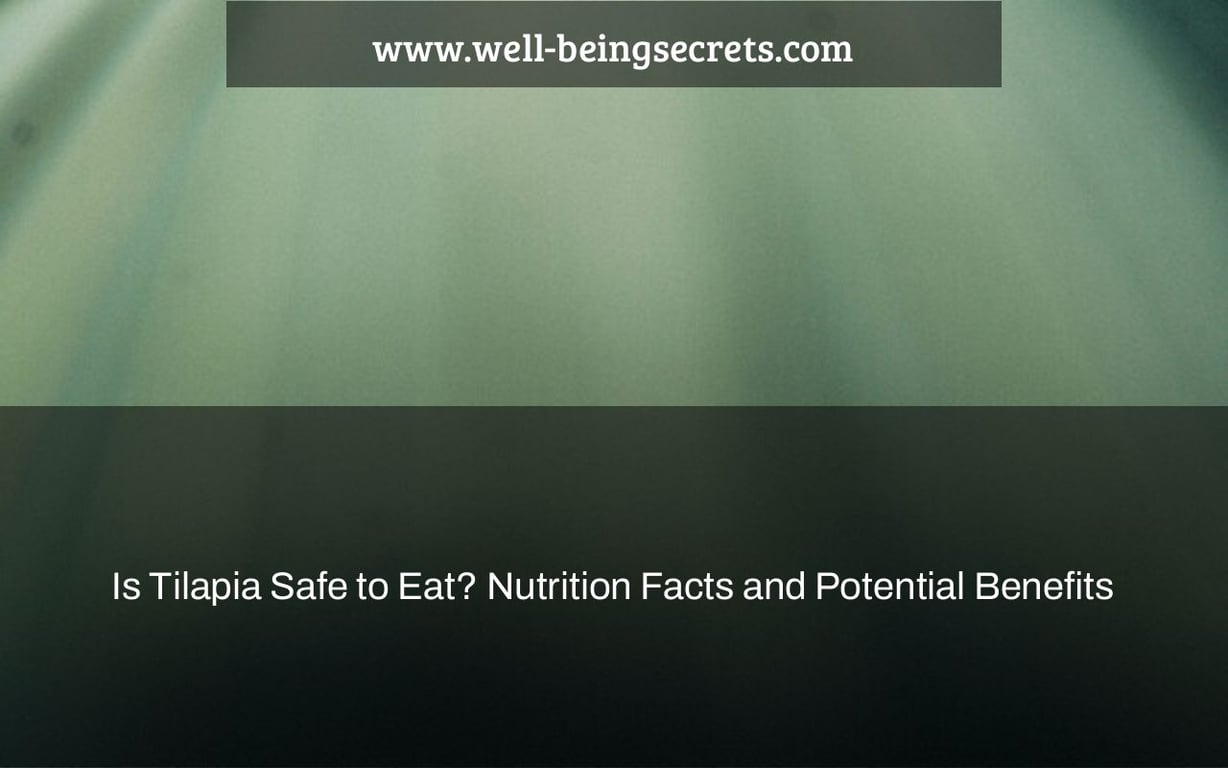 This is a question about the safety and nutrition of tilapia, a type of fish. Tilapia are commonly eaten in countries such as Mexico and China because they can be grown so much faster than other types of seafood like salmon or codfish. However, there has been some controversy over whether general consumers should eat them due to potential concerns with their cholesterol content.

Depending on where you get your fish, it might be beneficial or damaging to your health. Because it’s incredibly inexpensive, develops rapidly, and adapts well to new habitats, tilapia has grown tremendously popular in aquaculture and aquaponics throughout Asia, Mexico, Central America, and the United States.

However, despite the fact that fish is typically commended for its great health advantages, certain forms of tilapia have been linked to harmful side effects, including bacterial contamination, antibiotic resistance, and unsustainable farming techniques.

Is tilapia a true fish, then? Is tilapia good for you? This article will teach you all you need to know about this popular sort of seafood.

What Exactly Is Tilapia?

Tilapia is the common name for almost 100 different kinds of white cichlid fish. Tilapia is mostly a freshwater fish that may be found in shallow streams, ponds, rivers, and lakes.

Like other fish species such as swai, Tilapia adapt well to farming and are relatively affordable. They are grown all throughout the world but are notably widespread in Asia and the United States. China is the world’s greatest tilapia producer, followed by Egypt. It is the fourth most popular fish in the United States.

Tilapia is popular because of its mild flavor and firm, flaky texture, making it an excellent choice for folks who aren’t fond of shellfish. It’s also a flexible weekday staple that may be baked, broiled, grilled, fried, or sautéed.

Today, Nile, Blue, and Mozambique tilapia are the three most widely fished and consumed tilapia species.

The oldest variety, Oreochromis niloticus, or Nile tilapia, is endemic to northern Africa and Israel. Nile is a very versatile fish that can be maintained in a variety of ways and is one of the most sustainable farmed fish.

On the other hand, blue tilapia may be found in Florida’s lakes, rivers, and streams. It can survive in both saltwater and freshwater, unlike other species. However, it is not as widely cultivated as Nile variants because it does not grow as rapidly.

Finally, tilapia from Mozambique was imported to the United States for recreational fishing and aquatic plant management. However, it is currently found in tropical and subtropical settings all over the globe, and it is popular among fish farmers due to its ease of cultivation and adaptability.

Tilapia is a low-calorie, low-fat fish that is high in protein. It’s also high in selenium, vitamin B12, niacin, and phosphorus, among other vitamins and minerals.

The following nutrients are included in a 3.5-ounce serving of cooked tilapia:

Vitamin E, riboflavin, iron, zinc, and copper are all present in modest amounts in each meal.

Is it Safe to Eat?

There are a number of severe issues with tilapia’s nutritional composition as well as the manner it is reared and processed.

China’s tilapia fish breeding techniques, in particular, have sparked a lot of debate in recent years. According to a study issued by the USDA, fish bred in China are often fed excrement from cattle in order to save money. This may, however, raise the danger of infection and foodborne diseases like Salmonella, which can be deadly if left untreated.

Concerns have also been raised about the potential of contamination and the usage of toxic chemicals in many of China’s farmed fish. Some of the chemicals used in tilapia farming are also banned, which has resulted in the rejection of many tilapia shipments from China in recent years. According to a research by Seafood Watch, antibiotic resistance in some kinds of bacteria has also been connected to tilapia farming zones in China.

Choosing wild-caught or farm-raised tilapia from nations such as the United States, Peru, or Ecuador may help reduce exposure to dangerous antibiotics, chemicals, and pesticides while also supporting more sustainable agricultural techniques.

This omega imbalance may not only increase inflammation in the body, but it can also lead to chronic diseases, including heart disease, Alzheimer’s disease, and rheumatoid arthritis.

Despite the controversy surrounding this component, there are a few possible tilapia fish advantages to consider.

For starters, it’s high in selenium, vitamin B12, niacin, and phosphorus, among other minerals. In addition, the nutritional profile of tilapia includes a staggering 26 grams of protein per serving, placing it on par with other high-protein meals such as chicken and beef.

Protein is essential for various bodily functions, including tissue repair, muscular development, energy levels, and immunological function. Increasing your consumption of this important macronutrient may also help you maintain a healthy weight. Protein has been shown in studies to lower ghrelin levels, the hormone that promotes hunger and appetite and calorie intake, resulting in weight reduction.

Furthermore, tilapia fish is fewer calories than other fish forms since it is a lean protein with less than 3 grams of fat per serving. Salmon, for instance, has 206 calories per serving, but sardines have 208 calories per dish. As a result, it’s simple to include in a low-calorie diet for individuals trying to lose weight.

Tilapia is also readily accessible and very affordable when compared to other forms of fish. It also has a moderate taste, making it a wonderful way to introduce more seafood into one’s diet for individuals who don’t consume fish regularly.

Alternatives That Are Better For You

If you do decide to eat tilapia, stay away from any fish raised in China. While wild-caught types are usually the finest, they may be difficult to come by and can be costly.

If you want to eat farmed tilapia, Seafood Watch suggests choosing fish from Peru or Ecuador. Alternatives include fish grown in the United States, Taiwan, Colombia, Mexico, Honduras, and Indonesia.

Why should you not eat tilapia?

A: Tilapia is a type of fish that typically has low levels of mercury. However, this can vary depending on the species and how it was caught or processed. The level of methylmercury, which is one form of mercury found in fish, can be high in certain types like tilapia but lower in others like salmon since they eat other smaller fish to get rid of their higher levels.

Is tilapia safe and healthy to eat?

A: If you’re not sure about the health risks of tilapia, I would suggest going with a more sustainable seafood such as salmon or cod. Tilapia is often used for farming purposes and uses many resources to produce its meat that ultimately could be harmful in the long run.

A: Yes, since tilapia has a good fat profile, which makes it a healthy fish to eat. For example, tilapia fillets have 40% of fat calories and 25% from saturated fat. It is also rich in omega-3 fatty acids that are known to reduce inflammation.