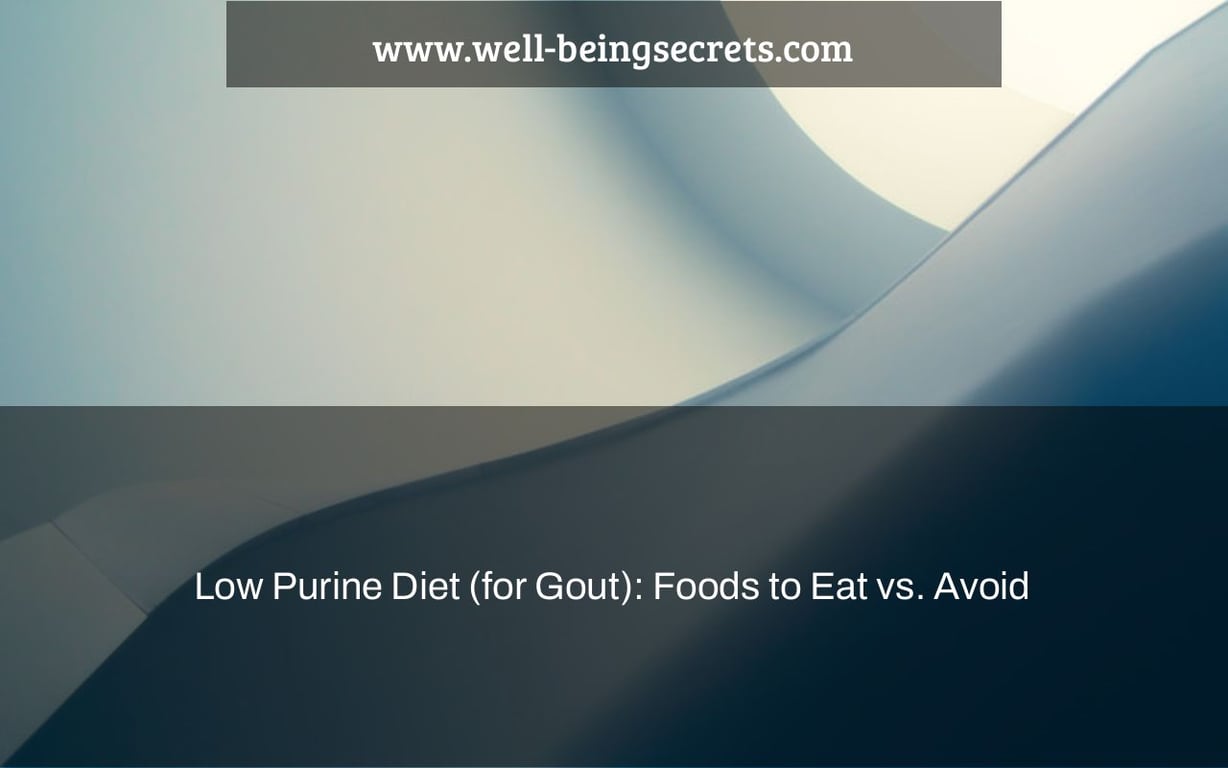 A gout is a form of arthritis that occurs when uric acid crystals build up in the joints. Though it can be treated with drugs, many people look for natural remedies. Here’s how to eat healthily and avoid foods with high purine levels.

Gout and kidney stones are painful disorders that afflict millions of individuals all over the globe. Fortunately, both may be effectively managed by adopting a few lifestyle changes and adhering to a low-purine diet.

Limiting your purine consumption may help avoid these dangerous diseases while also increasing your intake of key nutrients by emphasizing healthy whole meals like fruits and vegetables. It’s also straightforward to follow and effective, making managing symptoms and preventing flare-ups a breeze.

Here’s everything you need to know about a low-purine diet, including how to stick to it and how it might help you.

So, what is the biological meaning of purine? Purines are organic substances that may be found in a range of foods and are created naturally by the body. Purines and pyrimidines are the chemical building blocks of DNA and play an important role in general health.

On the other hand, Purine bases may be broken down into uric acid, which can form crystals in the joints and lead to gout, a painful and inflamed form of arthritis. As a result, a low-purine gout diet is often prescribed to help avoid uric acid build-up in the blood.

A gout diet menu is occasionally prescribed for patients who have kidney stones caused by uric acid build-up.

What Is a Purine-Low Diet?

A low-purine diet entails limiting your consumption of particular foods to reduce the purine metabolic pathways that convert purines to uric acid.

Fruits, vegetables, nuts, seeds, and legumes are all recommended as part of a healthy diet, whereas red meat, shellfish, wild game, and organ meats should only be taken in moderation.

Foods rich in fructose, a form of simple sugar, should also be consumed in moderation. Purine is formed when fructose is broken down, which may raise uric acid levels in the body. Although fruits contain fructose, they are also abundant in fiber, vitamins, and minerals, which may help to balance any harmful effects.

Soft drinks, fruit juice, and processed meals, on the other hand, often contain a high level of fructose and should be avoided on a low-purine diet.

Gout is an arthritic condition that causes swelling, discomfort, and redness in the joints. Fortunately, just a few small dietary changes may help avoid gout flare-ups and alleviate gout symptoms.

According to 2012 research out of Boston, eating purine-rich meals regularly raised the likelihood of recurrent gout episodes by roughly fivefold in those with gout. Another research published in the Asia Pacific Journal of Clinical Nutrition found that eating purine-rich foods such as red meat, shellfish, and alcohol frequently was linked to increased blood levels of uric acid.

2. Aids in the prevention of kidney stones

In one Iranian research, increased intake of purine-rich foods was connected to a greater incidence of kidney stones. On the other hand, reduced consumption of animal protein, according to a 2013 study published by the Universidade Federal de So Paulo, might help reduce purine intake and uric acid excretion, which could help avoid kidney stones.

A low-purine diet plan emphasizes nutrient-dense foods such as fruits, vegetables, nuts, seeds, and legumes. Other items, such as red meat, processed meat, and alcohol, should be avoided in the diet.

It may not only help you acquire the nutrients you need for optimal health, but it can also protect you against nutritional deficiencies and symptoms like weariness, hair loss, weakness, and constipation.

A typical low-purine foods chart is well-balanced and includes a variety of nutritious foods such as fruits, vegetables, nuts, seeds, and legumes.

Here are some examples of foods that may be consumed as part of a low-purine diet:

Foods to Stay Away From

High-purine foods such as processed meat, seafood, and organ meats should be avoided on a low-purine diet. Here are some of the most important purine-rich foods to eat in moderation:

Purines may be found in various plant-based foods, including spinach, cauliflower, mushrooms, and dry beans and peas. However, research suggests that these high-purine veggies don’t have the same effect on uric acid levels as animal-based items, and they may be eaten in moderation as part of a low-purine diet.

Suggestions for Sticking to the Diet

A low-purine diet does not have to be difficult to follow. In truth, it’s as simple as eating a range of nutrient-dense, low-purine foods, including fruits, vegetables, nuts, and seeds, while avoiding organ meats, processed meats, wild game, and some kinds of seafood.

Reducing your alcohol intake may also help you consume less purine and keep your uric acid levels low. Increased alcohol intake was linked to a greater incidence of gout, according to research published in Clinical Rheumatology. However, the sort of alcohol consumed may have an impact. One research found that moderate drinking of wine was not linked to an increased risk of gout, although moderate use of beer and spirits was.

There are many low-purine recipes accessible online, making it simple to include nutritious meals into your daily routine.

Although a low-purine diet is often suggested to help prevent gout attacks and alleviate symptoms, additional drugs and treatments may be required. Anti-inflammatory drugs, for example, are often administered to treat symptoms during a flare-up, while other medications are sometimes used to reduce uric acid production in the body.

It’s also worth noting that a low-purine diet may not effectively prevent all forms of kidney stones. Other dietary adjustments, lifestyle changes, and treatment procedures may be necessary if you have calcium oxalate, cystine, or struvite kidney stones.

Because many purine-rich animal proteins are also high in other essential elements like zinc, iron, and omega-3 fatty acids, it’s also vital to receive these vitamins and minerals from other sources in your diet.

Although nutrient-dense foods like beef and fish may be consumed in moderation as part of a low-purine diet, you should also eat a range of other nutritious foods like vegetables, legumes, nuts, and seeds to help fill in any gaps in your diet.

What foods should gout patients avoid?

A: Celery, broccoli, and cauliflower are all foods that patients with gout should avoid.

What are the foods that trigger gout?

A: Most foods that trigger gout are high in purine, a chemical compound. Foods that contain high concentrations of purines include red meat, shrimp, and caviar. If you’re not sure if something triggers gout for you or not, try it out and see how your body reacts to it.

A: Foods that reduce purines are red meats and poultry, beef, pork.