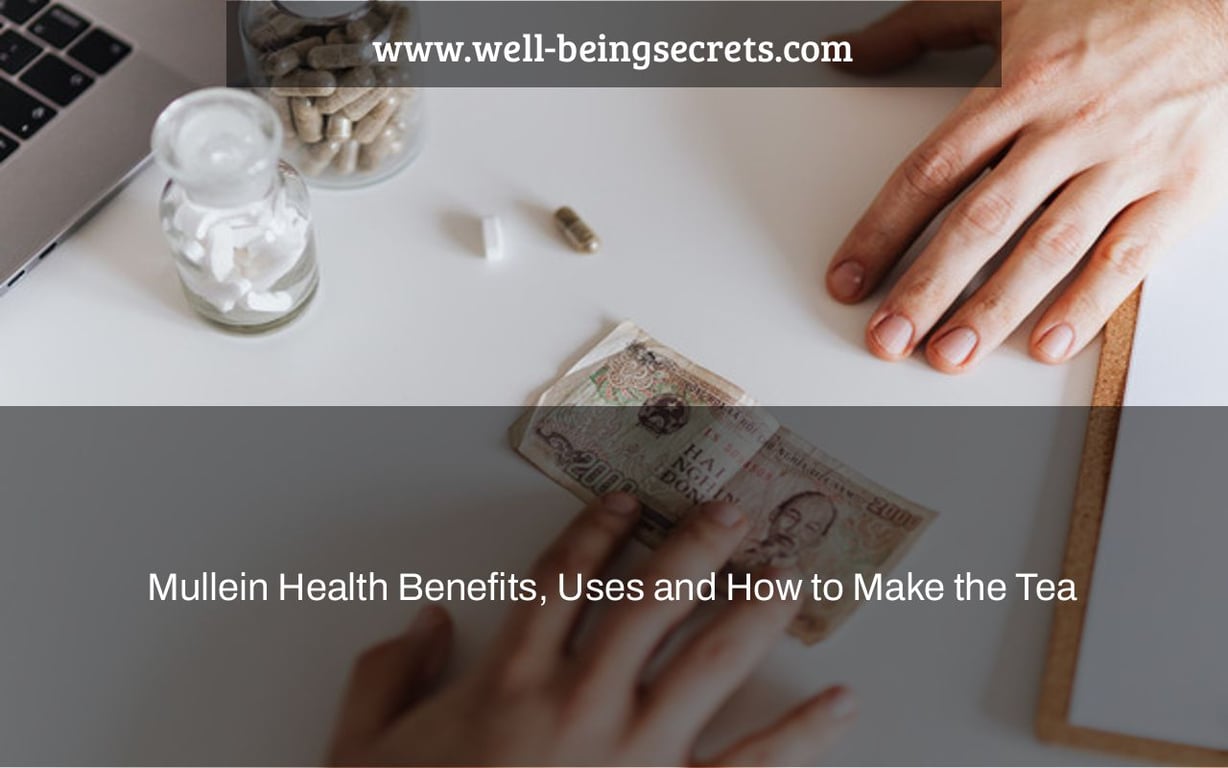 Mullein has been used medicinally for centuries and is still a widely-known medicinal herb that grows abundantly. It’s also worth noting that there are many common names it goes by, such as “greater celandine” “mullein.” Depending on the variety, Mullein can grow up to eight feet tall with yellow flowers in springtime and small leaves of dark green. Mullein tea is thought to effectively treat liver disease, digestive problems, and infectious diseases like ringworm if taken internally or externally.

Mullein is a plant that can be used for various health benefits. For example, it has been used to treat asthma, other respiratory problems, and skin ailments. Mullein tea is also made from the leaves of the plant.

Mullein has been utilized since ancient times, and its popularity and usage appear to be growing all the time. The plant’s leaves, blossoms, and roots are used to cure inflammatory disorders, diarrhea, asthma, coughs, and other lung-related problems, making it one of the most popular herbal remedies.

Earaches are typically treated using oil derived from the blossoms of the mullein plant. This oil alleviates the pain and inflammation associated with earaches in both children and adults. This plant may also be capable of combating influenza, herpes viruses, and bacteria that cause respiratory illnesses.

Traditional uses of this medicinal plant include the treatment of bruises, burns, hemorrhoids, and gout in different forms. The herb may be smoked, consumed, or administered topically. The herb has long been used to cure colds and upper respiratory infections in the Appalachia area of the United States. The leaves have also been used to soften and protect the skin as a topical treatment.

Let’s take a look at why Mullein could already be or soon will be a standout in your herbal medicine cabinet.

What Exactly Is Mullein?

Mullein refers to any of the approximately 300 species of Verbascum, a genus of large biennial or perennial plants endemic to northern temperate climates, particularly eastern Eurasia.

The common Mullein (Verbascum thapsus) has a single stem with huge, thick, velvety leaves and pale-yellow, somewhat irregular blooms that may grow up to seven feet tall. This is the kind you’ll most often see in shops.

Because of its towering stature and yellow blossoms, the plant is sometimes referred to as Aaron’s rod.

Mullein leaf may be used to produce a nutritious tea that has been used in traditional medicine for centuries. Mullein leaf tea may be purchased at your local supermarket or health shop or made at home.

Tea made from this yellow flowering plant might aid with sore throats, coughs, colds, hoarseness, and bronchitis. Some people also use it to help with digestive issues, including diarrhea and joint discomfort.

The leaves are simply boiled in boiling water and then filtered to produce the tea.

Flavonoids, saponins, tannins, terpenoids, glycosides, carbohydrates, proteins, lipids, and oils have all been discovered in the plant.

1. Infections of the ears

Mullein has long been known for its emollient and astringent characteristics, making it a good option for ear problems.

A tincture containing the plant alone or a mix of Mullein and other herbs are often sold in health shops (online) as a tried-and-true natural cure for ear pains and infections.

An herbal ear drop containing Mullein was shown to be equally as efficient as an anesthetic in a research published in The Archives of Pediatrics and Adolescent Medicine in 2001.

Mullein oil has also been used successfully to treat dogs’ ear infections and other health issues. That’s correct — don’t forget that natural therapies may also be used on your pets!

2. Calm Bursitis is the second kind of bursitis.

Bursitis is a painful disorder that affects the bursae, which are tiny, fluid-filled sacs that cushion the bones, tendons, and muscles around your joints. Bursitis occurs when the bursae become inflamed, and Mullein has been shown to have anti-inflammatory properties in studies.

Bursitis is most often seen in the shoulder, elbow, and hip. Prepare some mullein tea and soak a clean towel in the heated brew to aid with bursitis naturally.

The cloth may then be regularly applied to the problematic area to help reduce inflammation and function as a natural pain reliever for bones and joints. A healing poultice may also be made.

3. Disinfectant with a High Potency

Mullein oil is a powerful disinfectant that may be used to treat infections inside and outside of the body. In addition, according to a study published in the journal Medicinal Chemistry, the plant contains antibacterial characteristics and may be utilized to treat infectious disorders.

It’s been used to treat infections in the ears, colon, urinary system (including vaginal yeast infections), and kidneys. In addition, it may help fight infections on the skin when used externally.

Mullein leaves contain an antioxidant along with one anti-inflammatory ingredient, further aiding in the removal of mucus from the body, in addition to soothing the raw, inflamed tracts of your system, such as your throat. In addition, Mullein’s calming effect on the bronchioles may make it an excellent asthma treatment.

Some people smoke Mullein to treat respiratory problems. For example, the dried herb may be put in a pipe and smoked to relieve bronchial congestion as per traditional medicine. However, this is a dubious application method, and if employed, it should never be done for an extended period.

Furthermore, smoking mullein is one of the least efficient ways to get the benefits of its medicinal characteristics. If you smoke and have lung congestion, switching to Mullein instead of tobacco may help.

Mullein has a long history of being astringent and emollient in medicine. Great Mullein has been used to treat skin, throat, and respiratory ailments since ancient times.

A famous Irish folk treatment for TB is fresh leaves cooked in milk and taken daily.

Mullein has been used for non-medical purposes in the past! It’s been used to create torches and as a coloring agent in the past. Yellow hair color has been made from yellow mullein flowers in the past. It’s also utilized in alcoholic drinks as a flavoring element.

Some species produce poisonous seeds. The seeds of the species N. phlomoides, in particular, are mildly narcotic and contain a form of toxic saponin. As a result, fish have been intoxicated with these seeds to make them easier to capture.

How to Make Use of

Mullein may be acquired in various forms, including dry, powdered, tea, tincture, and oil, at your local health food shop or online.

Make your mullein tea at home by blending 1 cup boiling water with 1–2 tablespoons dried leaves or petals and steeping for ten to fifteen minutes. This tea should be drunk one to four times per day for therapeutic purposes.

Follow the guidelines on the mullein ear oil bottle for ear infections. Two to three times each day, you should put gently warmed ear oil into the affected ear. Use one drop for children aged one to ten and two drops for individuals aged ten and over.

As previously stated, Mullein may be smoked and was used in folk medicine as a natural treatment. Using a pipe to smoke this smokable herb is possible, but it isn’t the best way to use the plant for healing.

Mullein tea may be purchased prepackaged, but if you have some fresh or dried mullein leaves or blossoms, it’s easy to brew the tea yourself.

Tea: Make a strong mullein tea with 1 cup of boiling water and 1–2 tablespoons of dried leaves or blossoms for sore throats, coughs, and other upper respiratory disorders. Allow 10–15 minutes for the mixture to steep. Until your symptoms improve, drink at least 1 cup every day.

Cold Oil Extraction: Cover the flowers with olive oil in a glass container with a lid, leave the container on a sunny windowsill to steep for 7 to 10 days, filter, and store in dark glass bottles for a cold mullein weed extraction.

Mullein’s side effects are pretty uncommon when taken correctly and for a short time. In general, there have been no significant adverse effects associated with the plant. However, sporadic case reports of persons having adverse effects such as contact dermatitis have been reported.

If your eardrum is perforated, don’t use the herbal ear oil, and if your symptoms are significant or don’t improve rapidly with natural therapy, see a doctor.

Mullein has been shown to reduce the efficiency of antidiabetic medicines and to amplify the effects of muscle relaxants and lithium, among other things. So if you’re on a prescription diuretic, see your doctor before using the herb since it might also cause diuresis.

Mullein products are not suggested for women breastfeeding or expecting a child.

How do you make Mullein tea?

A: There are multiple ways to make mullein tea. You could put dried leaves in a pot with boiling water and let it steep for 20 minutes. You can pour boiling water over the leaves or use fresh flowers from your garden.

Can you make tea with fresh Mullein?

A: Yes. You can use fresh Mullein to make tea, but dried should work just as well.

How much Mullein should I take daily?

A: This is a difficult question to answer, primarily dependent on the individual. Most people use two or three tablespoons of mullein powder daily to achieve relief. Those who are having trouble with insomnia may want to take up to four tablespoons before going to bedtime (or during nap time)