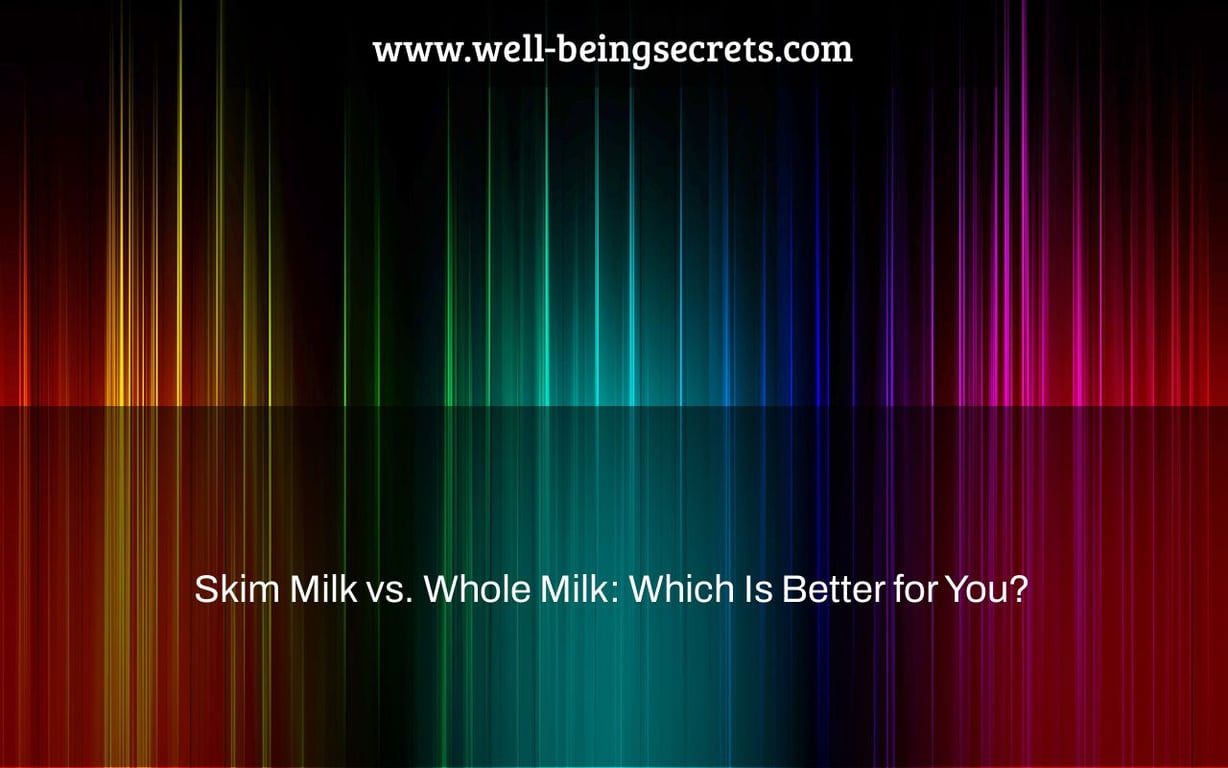 In the United States, skim milk is most often seen as a healthful alternative to whole milk. Although this might be true for some people, including both types in your diet are many benefits. Let’s find out which type of milk you should drink every day!

For decades, skim milk has been considered a morning essential. It has, however, become a contentious element, with new studies popping up all the time, either questioning why skim milk is harmful or contesting its possible influence on bone strength, heart health, and other factors.

While skim milk is low in fat and a good source of various nutrients, there are certain disadvantages to this dairy product to consider and some reasons why you should choose full milk instead.

What Exactly Is Skim Milk?

If you go down the dairy aisle of your local supermarket, you’ll see numerous different varieties of milk available, each with a different fat level.

With roughly 3.25 percent milk fat, whole milk has the highest fat content. On the other hand, are low-fat and skim milk made by eliminating a percentage of the fat from whole milk, resulting in a reduced overall fat and calorie product.

Skim milk, often known as nonfat milk, is a form of milk with a fat content of less than 0.5 percent. Because of the decreased fat level, it has a lower calorie count, with just 58 percent of the calories in a cup of whole milk.

Skim milk, like other varieties of milk, comes in a variety of shapes and sizes. Skim milk powder, for example, is made by eliminating the water from skim milk, resulting in a considerably longer-lasting product. There are also canned, evaporated, and sweetened condensed skim milk types available.

Skim milk has fewer calories than full milk since fat has a high-calorie content. A cup of skim milk, for example, has roughly Calories: 86, whereas a cup of whole milk has 146 calories.

There are a few additional minor differences in the nutrition facts for whole milk and skim milk, particularly when it comes to the quantity of omega-3 fatty acids in each cup. Omega-3 fatty acids are a kind of important fatty acid that has been demonstrated to boost immunological function, reduce inflammation, and improve heart health, among other benefits. Whole milk provides more omega-3 fatty acids per serving than skim or low-fat variants due to its greater fat content.

Most cooking and baking recipes ask for whole milk rather than skim since the added fat may improve the finished product’s taste and texture. Whole milk may also help keep baked items delicate and soft by adding moisture.

If you’re using skim milk instead of whole milk, you may need to tweak your recipe by adding a little more butter or oil to enhance the flavor and texture.

Skim milk, like other varieties of milk, is packed with nutrients. Skim milk calories are minimal in each serving, but it is high in protein and key micronutrients, including calcium, phosphorus, and riboflavin.

The following nutrients are found in one cup of nonfat milk:

The skim milk nutrition facts also include a small quantity of niacin, iron, and copper, in addition to the nutrients stated above.

Benefits to Your Health

There are various possible skim milk advantages due to its outstanding nutritional profile.

Milk is an excellent source of calcium, containing almost 30% of the daily required amount in a single one-cup drink. Calcium is an essential element that promotes bone health. In fact, it’s believed that the bones and teeth retain nearly 99 percent of the body’s calcium.

In several studies, calcium consumption has been linked to higher bone mineral density and a decreased incidence of fractures. Calcium supplementation may also help prevent osteoporosis, a disease characterized by brittle, weak bones and a greater risk of broken bones and fractures.

Skim milk has a lower calorie count than full milk since the majority of the fat has been removed. This makes it an excellent choice for individuals on a low-calorie diet since it may assist offer a variety of essential nutrients without dramatically increasing calorie intake. W

Skim milk has fewer than 100 calories per cup and over eight grams of protein, as well as a decent quantity of calcium, phosphorus, riboflavin, and vitamin B12.

With 8.5 grams of protein per cup, skim milk is an excellent source of protein. Protein is essential for muscular development, tissue repair, vascular function, and immunological health, among other things. A lack of this crucial vitamin may result in catastrophic consequences, such as stunted development, muscular atrophy, weakness, and an increased risk of disease and infection.

Furthermore, consuming adequate protein in your diet may help you lose weight. Protein has been shown in studies to help lower ghrelin levels, the “hunger hormone,” as well as appetite and calorie consumption.

4. Vitamin D may be present.

Vitamin D, an essential fat-soluble vitamin available in relatively few dietary sources, is often added to milk. Vitamin D, sometimes known as the “sunshine vitamin,” is produced by the skin in reaction to sun exposure. Vitamin D insufficiency is unfortunately quite widespread, impacting up to 50% of the world’s population.

Vitamin D has been linked to a variety of illnesses, including heart disease, cancer, diabetes, and depression, in addition to boosting calcium absorption to promote improved bone health. For people who don’t receive enough sun, eating a range of vitamin D-rich foods may be very helpful to their health.

Due to its decreased saturated fat level, many consumers prefer skim milk over full milk. While saturated fat has long been condemned as an unhealthy, artery-clogging element, a new study suggests that it may not be as harmful as previously thought.

The findings of 76 research were gathered in a huge 2014 study published in Annals of Internal Medicine, which revealed no clear relationship between saturated fat intake and heart disease. Other research suggests that saturated fat may help raise levels of good HDL cholesterol, which may be linked to a decreased risk of stroke mortality.

Despite their increased calorie content, some research suggests that full-fat dairy products may be better for your waistline. In fact, a study out of Seattle found that higher consumption of high-fat dairy products was linked to a decreased risk of obesity.

According to Swedish research, women who drank at least one serving of whole milk per day were less likely to gain weight during a nine-year period than those who consumed low-fat dairy products.

In addition, a recent study shows that high-fat dairy products may protect against metabolic syndrome, a combination of diseases linked to an increased risk of heart disease, stroke, and diabetes.

Keep in mind that anyone with lactose intolerance or a milk allergy should avoid both skim and full milk. Cow’s milk is likewise inedible to vegans and others on a dairy-free diet.

Finally, wherever feasible, use organic, grass-fed milk when purchasing milk. Organic milk, in addition to having a greater concentration of heart-healthy fatty acids, may also aid in reducing exposure to antibiotics and hormones present in regular dairy.

Raw milk is also available, which is milk that has not been pasteurized or processed, allowing it to retain more nutrients.