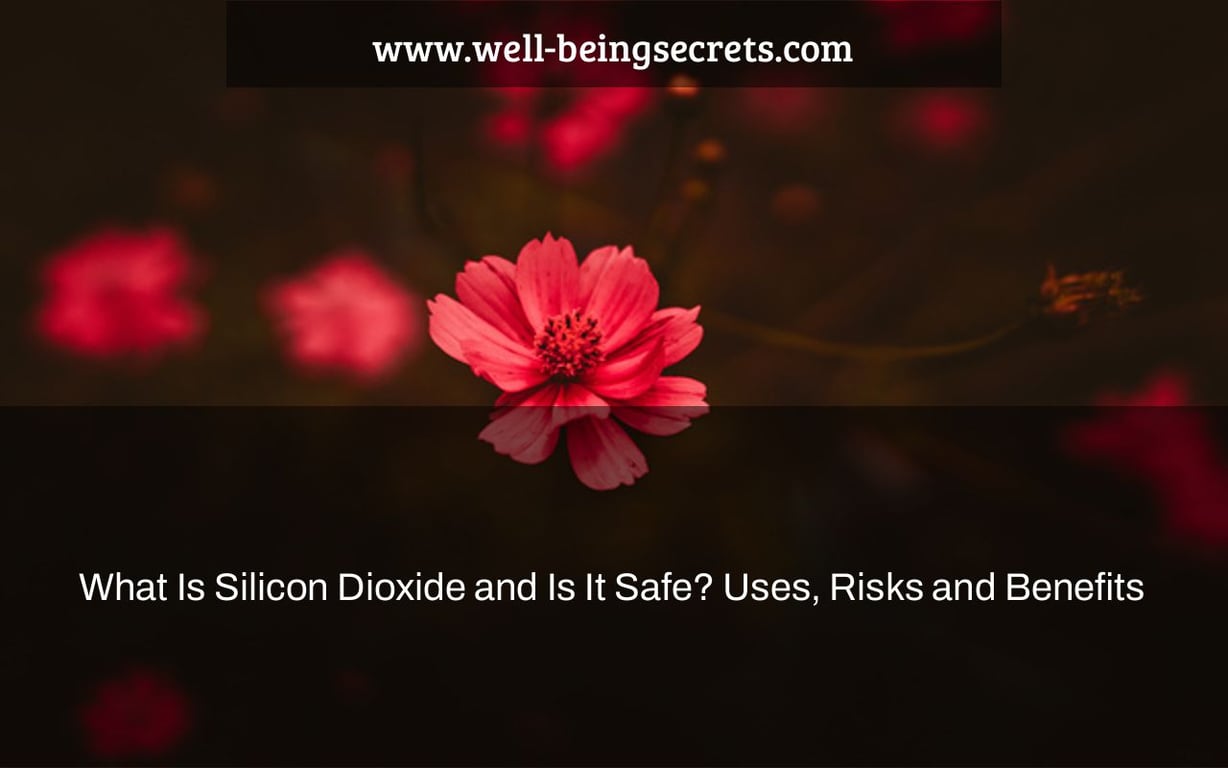 Silicon dioxide is a chemical compound often used in the manufacturing of semiconductors and other electronic products. It may also be found as an ingredient in toothpaste, soaps, cosmetics, pesticides, and more. Silicon dioxide has many different benefits for the human body (and some not-so-great risks).

Anti-caking additives are often used to enhance the texture and shelf life of granular and powdered food items, such as powdered protein and spices. Silicon dioxide is one such addition, with the capacity to keep substances from getting wet and clumping together.

What precisely is silicon dioxide, and is it safe? This chemical, also known as silica, may be found in nature in the form of specific minerals and can also be synthesized in laboratories for usage in meals, supplements, and cosmetics.

Although studies have established that the kind present in our food supply is safe, persistent exposure to specific forms of silicon dioxide may pose a danger to persons who work in the mining, construction, and steel sectors.

What Is Silicon Dioxide and How Does It Work?

Silicon dioxide is a crystalline substance that is naturally present in the earth’s crust. Therefore, the quart may be mined and purified to acquire it.

It’s also present in various creatures and animals, some plants (particularly grains), and drinking water (a component of human ligaments, cartilage, and muscle).

It’s also made in laboratories and found in items like baking ingredients, protein powders, and dry spices as a popular culinary additive. This chemical is used in a range of sectors, including food, cosmetics, construction, and electronics.

What is the composition of silicon dioxide? It bears the chemical formula SiO2 because it is made up of a mixture of silicon (Si) and oxygen (O).

What is silica, and how does it vary from other minerals?

Depending on how it’s made, silica/silicon dioxide comes in a variety of forms, including:

Usage in Food and Supplements

What foods have silicon dioxide in them? It’s found in modest quantities added to dishes like:

Silicates may be found in a range of plant foods, including green leafy vegetables, peppers, beets, sprouts, rice, and oats, as well as vegetables and cereal grains.

Silicon dioxide is used in food items to help maintain their texture by blocking moisture absorption and preventing components from clumping/caking together. It’s most often found in granular or powder items because, as the US Food and Drug Administration (FDA) puts it, “it speeds up dispersion by keeping food particles apart and allowing water to moisten them individually rather than creating lumps.”

Silicon dioxide may appear as a clear, tasteless crystal or an amorphous powder, depending on its structure (sometimes called silica powder).

According to the USDA, amorphous silica has “very distinctive physical and chemical features and promise as an additive in various processing sectors.” It has a tiny particle size, a large specific surface area, and gelling and thickening properties, for example.

Another feature that distinguishes silica is its solubility. Water and organic solvents do not dissolve silicon dioxide.

Silicon dioxide synthesis is an example of “nanotechnology,” which entails reducing material to extremely small particles with diameters ranging from one to 100 nanometers. The material’s physical, chemical, and biological characteristics and functions are altered as a result.

While nanotechnology in food processing may enhance the flavor, color, appearance, consistency, and texture of meals, it also has the potential to alter how materials are absorbed and eliminated in the human body.

Is it safe to eat silicon dioxide? According to the FDA, silicon dioxide in food is typically considered safe for human consumption, as long as it is ingested in tiny doses.

Is silicon dioxide a cancer-causing substance? There is no evidence that the kind found in meals promotes cancer development. According to the Environmental Protection Agency, crystalline-free silica provides “little danger” to people.

Silicon dioxide adverse effects are conceivable, albeit they are uncommon. This might include allergic response symptoms as well as stomach issues.

One potential concern with food-borne nanoparticles (which include silicon dioxide as well as compounds like silver, titanium dioxide, iron oxide, and zinc oxide), according to some research, is that they may cause GI issues such as leaky gut syndrome, as well as DNA and cell damage if consumed long-term. More study is required to address these issues since we don’t know much about the long-term effects of regularly ingesting nanoparticles.

Another difference to make is that crystalline silica, which is found in soil, sand, granite, and other minerals, is not the same as the form of silica found in meals. Long-term exposure to crystalline silica may be harmful to the respiratory system, leading to lung damage and illness. Thus, anybody who works in close proximity to this substance must exercise caution while handling it to avoid adverse effects.

Those who work in the mining, steel, construction, and sandblasting sectors are the most vulnerable to crystalline silica-related adverse effects.

Are there any advantages? (In addition to RDA/Limits)

Is there any evidence that silica/silicon acquired from the diet has any health benefits? Overall, it seems to be essentially neutral when used as a food additive, giving little benefit other than improving foods’ texture and shelf life.

One explanation is that food ingredient silicon dioxide (SiO2) has a low intestine absorption rate.

However, similar goods such as diatomaceous earth, which has higher silica concentrations, seem to be beneficial.

According to several research, silicon is a necessary element for the body since it aids in the formation of strong bones, hair, nails, and teeth. It may have anti-aging properties and aid in the prevention of symptoms linked to silicon deficiency, such as:

According to research published in the International Journal of Endocrinology, Silicon has been proven to enhance bone development and have bone-protecting qualities. It may also play a role in collagen creation. According to certain studies, silicon may assist enhance bone density and flexibility and protect teeth.

Eating nutritious plant foods and herbs is the greatest method to get natural silicon. Among these foods are:

There’s some evidence that eating roughly 40 milligrams of silicon each day will help you have stronger bones.

The FDA has specified that the amount of silica added to food cannot exceed 2% of the product’s total weight. The Expert Group on Vitamins and Minerals established a maximum safe limit of 12 milligrams per kilogram of body weight per day for daily silicon intake (for a 60 kg adult).

It isn’t necessarily harmful to ingest more silica than is recommended, but there isn’t enough evidence to say how much is safe.

Is silicon dioxide harmful to humans?

A: Silicon dioxide is an important compound that plays a key role in the production of solar cells, semiconductors, and LCD screens. However, it can be toxic if inhaled or swallowed.

What is silicon dioxide used for?

A: Silicon dioxide is a compound that can be used to make many different materials. It is mainly used in producing silicon-based semiconductor chips, glass, and ceramics for windows or as an abrasive material when coating metal surfaces with paint.

What are the health benefits of silicon dioxide?

A: Silicon dioxide is a chemical compound that has numerous uses. It can be found in the production of glass, ceramics, and concrete, and many other products like cosmetics or silicas gel, to name but a few examples. Silicon dioxide has several health benefits regarding its use in the body, including it being used for bone healing and fighting cancerous cells.